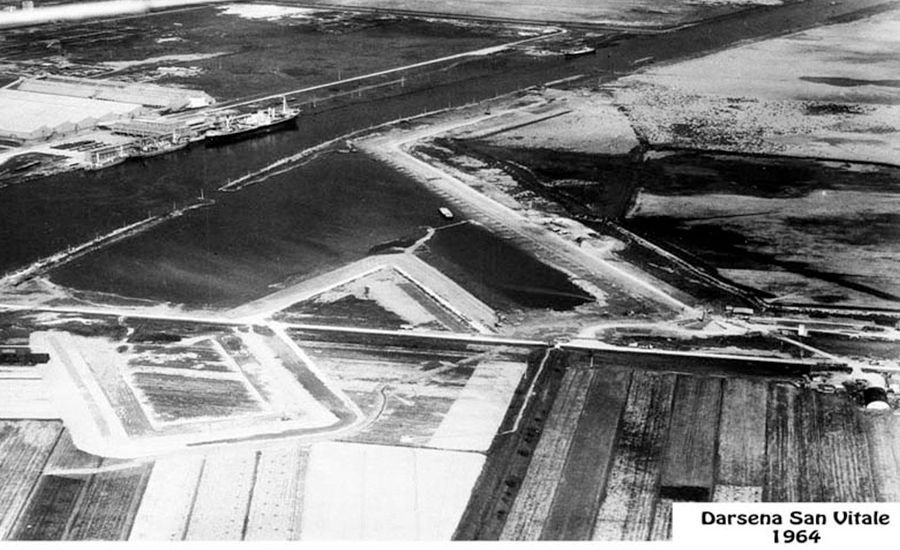 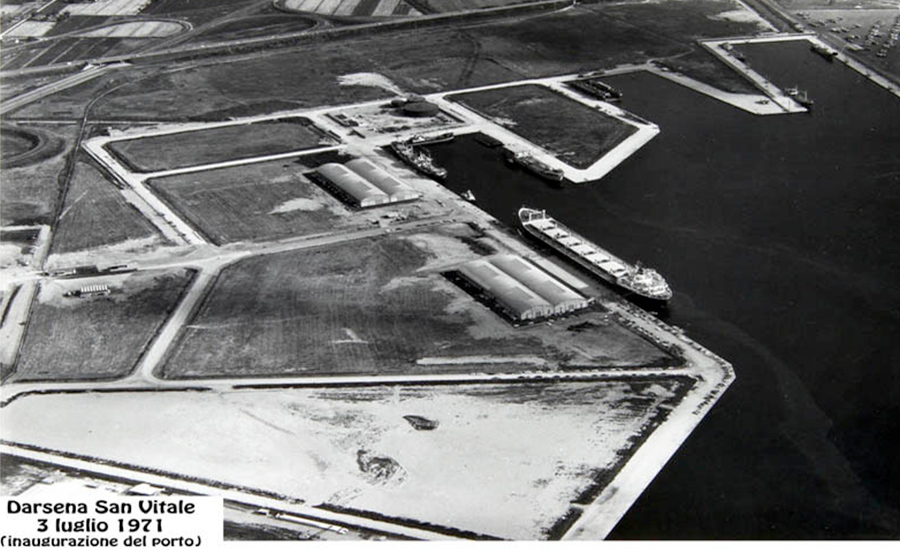 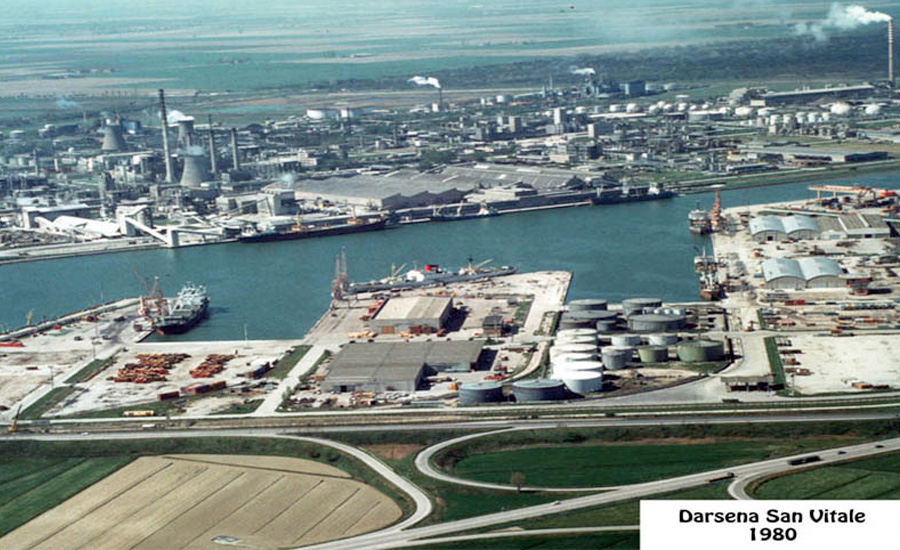 SAPIR was established  on 28 June 1957 as a joint stock company with a corporate capital of a million Italian lire, which could be increased to twenty million. The company’s purpose was to design, build and develop the port of Ravenna. The company’s founders were ANIC (part of the ENI Group), the Chambers of Commerce, and Serafino Ferruzzi, with strong support from Italy’s Transport Minister, Giuseppe Medici.

The Board of Directors met for the first time on 23 August of the same year, and elected Enrico Mattei (President of the ENI) as its chairman.

A few months later, the Ravenna Local Authority became a shareholder in SAPIR, followed over the years by the Provincial and Regional Authorities as well.

In 1958, the chairmanship passed on to the port’s designer, Luigi Greco. Then, from 1964 to 1974, the post was occupied by Luciano Cavalcoli, President of the Chambers of Commerce, and the most strenuous supporter of the cause for Ravenna’s port.

SAPIR obtained the necessary authorization to proceed with the construction work at the port under Italian law  528/1961, known by the name of  the Ravenna-born Minister of Public Works at the time, Benigno Zaccagnini. This piece of legislation entrusted SAPIR with the completion of all the public works in the areas of Ravenna’s port and industrial zone.

Excavation work on the Candiano canal had begun already in the first half of the 18th century, but it needed to be made wider and deeper. The earth removed in the process was needed to reclaim and repurpose the marshy land behind its two banks.

The works needed in the area began in 1963, with the speedy excavation of the canal and the building of wharves in the San Vitale area. As the works went ahead, there was a gradual increase in the amount of traffic the port could handle because they enabled larger and larger ships to dock in Ravenna. The port was officially opened with a ceremony on 3 July 1971.

Another important chapter in SAPIR’s story was written in 1976, when another famous figure from Ravenna, Sergio Cavina (then president of the Emilia-Romagna Regional Authority) promoted the regional law that enabled Sapir to establish its terminal.

For more than 30 years, the story of SAPIR has coincided with the story of the Port of Ravenna that the company built and managed, achieving results that were initially unimaginable.

Legislation in 1994 gave rise to the creation of the Port Authority (which acquired all the functions of public interest on matters of port management), and SAPIR’s role in the steering and planning of the port were declining, so the company turned its attention to managing its own areas and to further developing its terminal activities (art. 2 of its Statute).

In 2017, to celebrate the 60th anniversary of its establishment, Sapir commissioned a study and a publication  about its story.

Director for assets, development and IT: Davide Serrau 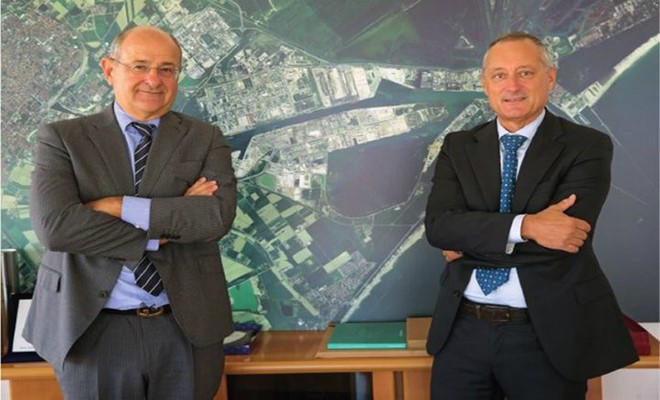 On 15 May 2001, SAPIR’s quality system was certified according to the UNI EN ISO 9002:1994 standard, and it was updated as the standard evolved to comply with the subsequent editions of 2000, 2008 and 2015. On 6 September 2004, SAPIR was the first terminal at an Italian port to be certified as complying with the OHSAS 18001 standard, and it has retained this certification over the years with this standard, also switching to UNI ISO 45001:2018.

This necessarily virtuous and substantial process places the human factor at the heart of company policy, making it the focal element of proper business management, and focusing on safety and a greater ethical and social responsibility.

In December 2018, SAPIR was also awarded AEO certification by the Italian Customs Agency. As an authorized economic operator, it benefits from various advantages that have a direct effect on its customers. At the time of customs procedures, for instance, there are fewer checks involved, their customers take priority in the completion of customs clearance operations, and they have a choice regarding where these procedures are carried out.

Following the adoption of the first legislation in Italy (D. Lgs. 8 June 2001, n. 231) to introduce a regime of “administrative responsibility” for businesses, Sapir adopted an organizational model in 2005 for the purpose of ensuring that its commercial and business management activities are founded on principles of honesty and good faith.

The Sapir Group has also adopted a code of ethics that lists the set of values that the Group acknowledges, accepts and shares, on every level, in the conduction of its business activities.

The values and specific operational recommendations expressed in the company’s organizational model and code of ethics are binding for all of the Group’s managers, directors and members of staff. Compliance with them is a necessary condition for any type of working relationship, be it commercial or more generally business-related, to be established between third parties and the companies in the Sapir Group. 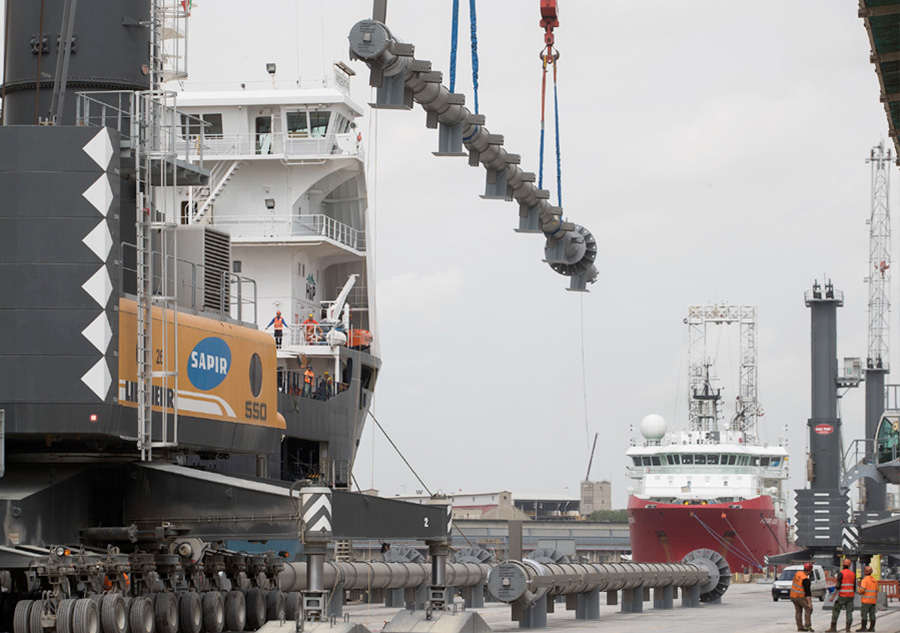